These are my children. 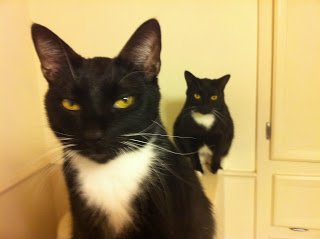 That’s Bread up front and Butter behind him. I adore them, but they are testing me.

Until recently, we had a routine of twice-a-day feedings, once in the morning and once in the evening.  But Bread and Butter months ago started to nag at me at five, then four, then three in the morning to get up and feed them.  By “nag,” I mean they would meow excessively, walk all over me, and poke and prod me until I had no choice but to get up and feed them something.  Butter, in particular, nags by sitting on my chest and poking at my face and lip with a single nail in her right claw.  She never punctures my skin. She just pokes. I have half a mind to throw her across the room when she does it, but of course I could never do that.

So how do I make the early morning nagging stop?  I’ve considered locking them out of the bedroom at night, but then they can’t cuddle with me or access their litter boxes, which are in my spare bedroom closet.  I’ve tried ignoring them but they are loud and persistent and relentless.  I’ve tried feeding them later in the evening so maybe they’ll wait until later in the morning to bug me, but even after a midnight feeding, they want more at three or four in the morning.  So lately, I’ve been getting up and giving in by putting a little something in each of their bowls at ridiculous hours of the morning.

They’re winning.  It’s like they are smarter than I am.  Surely that can’t be right.  Can it?

19 thoughts on “Smarter Than Bread and Butter?”

Leave a Reply to Sara Murray, Free You Up, LLC Cancel reply