This trip to Portland had a rough beginning. My flight was delayed for two hours, which was fine, except that it meant sitting in a waiting area with lots of people who were heading to Portland for this marathon, all of whom seemed ridiculously stressed. I don’t bug easily, but they bugged me so much that I had to get up and move twice to get away from their craziness. But since getting on the plane, the trip has gotten much better.

I slept the entire flight. Two nights ago, I was up until after 1:00 a.m. because I had a friend over for dinner. Last night, I played tennis after work and then returned to the office until about 11:30 to get some things done. Last year, I cancelled my trip to Portland for the marathon because work was too busy. I was determined not to let that happen again, so I powered through my work, I packed well after midnight, and once I got on the flight, I slept. It was the sort of sleep that brought on dreams that were so vivid at the time but are completely lost to me now. 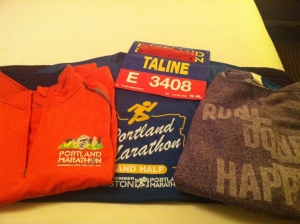 Since arriving in Portland, I went for a short run and ended my run at the hotel that was hosting packet pickup. I got my race bib and shirt, which I’m pleased to report is far too big on me. Then I bought an orange long sleeve shirt and a purple sweatshirt because a Texas girl needs lots of cold weather gear? I don’t know. I liked the orange, and I loved the saying on the sweatshirt: “run + done = happy.” I plan to wear it on Sunday after the race.

Then tonight, I had dinner at a fancier than I intended place next door to my hotel and finally finished Let’s Explore Diabetes With Owls, which I loved, and then I spent the evening at Powell’s Books at a reading by Linda Spalding. I didn’t know her before tonight, but I figured Powell’s would draw good authors, and I was right. It’s been a lovely night.

This is only my second time in Portland in the last year. I came just over a month ago for Hood to Coast and had a great time. This time I’m alone, though tomorrow I have a dear friend coming to spend the day with me. I’m feeling pretty raw being here. I’m having one of those nights where the tears are just below the surface of my smile and both the smile and the tears that I haven’t released are equally genuine.

I said before that I feel like this month is the end of what’s been a rough (but wonderful) year. This trip to Portland feels like a farewell of sorts. This town holds so much of my heart. It’s not my home, and it didn’t feel like my home even when it was for a short time. It’s just a place where a girl I once knew and a girl I once was spent some time what feels like a very long time ago.

I’ve come here to run a race, but mostly, I’ve come here to lay a dream to rest. I plan to do that by running my heart out on Sunday. I’m going to run as fast as I can. I’m going to pour my sweat and perhaps some tears and hopefully no blood all over this city that carries some of my most vivid dreams that are mostly lost to me now. And then I’m going to go home, to my real home, to the place where I live with Bread and Butter, and start again.