When I was in Nashville, I heard a good bit of live music. One of my favorites was a guy named Travis Meadows. He introduced himself by saying that he found songwriting to be a place where he could bleed safely. I think that about writing generally, so I immediately took a liking to him. All through the night, I found myself jotting down things he said and lines from songs he sang. Here are some that really struck me.

I loved his music. I’m grateful for his words and the example he set for me as someone who is willing to be honest and vulnerable. I hope I’ll have another opportunity to see him perform again soon. If you get to hear him before I do, know that I’m jealous. And let me know what you thought.

I’ve got music on the brain, possibly because I spent the weekend in Nashville and went out for live music three of the four nights that I was there. This is a list of songs that I think are worth your time:

I have listened to each of these songs again and again in the last few weeks. They are my current favorites. What are yours?

This was a throwback weekend. Last night, I went to a concert at the Cactus Cafe on the University of Texas campus, and this morning, I ran the ten-mile loop around Lady Bird Lake. Years ago, I did both frequently, but I can’t remember the last time I did either. 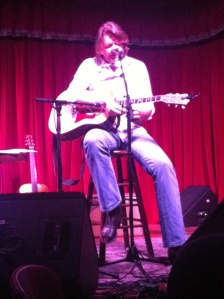 Elizabeth suggested the Cactus Cafe, and I was quick to jump at the opportunity when she said Bruce Robison was playing. I’ve loved him since the mid-1990s, and I used to go to his shows regularly, but in my older age, late nights are harder for me than they once were. So an 8:30 show at the Cactus was right up my alley. And even better than being early, it was just Bruce and his guitar. I love, love, love a man and his guitar. And when that man is Bruce? That’s a damn fine evening.

He took requests and played songs of his that I’d never heard. In some instances, he was surprised that people knew particular songs, and in others, he hadn’t played them in so long that he had to ask the audience to help him remember what the first lines were. It was incredible. I can listen to him sing for hours and hours.

I had intended to leave his show around 10:00 pm to get home for an early run the next morning, but I didn’t. I couldn’t. I had too good a seat and it was too good a show to walk out early. What a gift of an evening.

Then this morning, I met Erin for a run. She suggested we run the 10-mile loop, which I hadn’t done in over a decade since my days of training with Austin Fit. I had been meaning to ask someone to show me the route because I remember it involved some turns that weren’t obvious, but I hadn’t gotten around to it. So this morning, I jumped at the chance to run it with Erin.

Erin is faster than I am, so she pushed me pretty hard. It was fun to work and fun to run a “new” part of the trail. Riverside Drive has definitely changed since I last ran over there. It’s far more developed, and the trail along the lake was prettier than I remembered it being. I’m excited to add that longer route into my rotation of options for long runs.

There’s a lot I can do here. This weekend was a good reminder that I live in a wonderful place. I just need to get out and enjoy it.